Daniel and I had purposed early on in our marriage that we would really like to purchase a house and be moved in by the time we had been married for two years. Neither of us were particularly excited at continuing to pour money into a house that wasn’t ours, and that we couldn’t change and customize to fit our needs as a growing family. It became quite clear shortly after Oliver’s birth that we would need to start actively looking for a house of our very own.

We began to watch real estate listings in various areas, and even put in offers on two different houses that fell through. We were beginning to get discouraged and wondering why it seemed that God was moving us on with nowhere to go.

One evening, we were scrolling back through listings once again and looked in an area that we hadn’t looked at before, and the “perfect” house popped up. It was exactly the size we were looking for, sat on an acre of land, and is incredibly close to Daniel’s workplace! First thing the next morning, Daniel called our agent, one thing led to another, and we were able to look at the house and put in our offer that day.

Our real estate team went over and above to make sure we had everything in order, and we found out that the then-current owners had accepted our offer! We got our earnest money in and began the process of finishing what we would need for the closing.

The closing went really smoothly…both our financing team and again, the real estate team we were using were so fantastic and were able to help us make sure all the paperwork was in order. The actual closing meeting was comical…there are so many pieces of paper that you sign. The first few signatures look great, but the more we signed, the worse our signatures got. 😀 All in all, it took about an hour, and we were done! It would still be a week before we actually took possession of the house, but we were still floating on Cloud 9 of “we own a house!!”.

We were able to sit down with the old owners for breakfast at our local Cracker Barrel when it was time to take possession, so that we could get to know them a little better and they would have faces to go with our names. We sat chatting for hours and thoroughly enjoyed the time. They were moving out of the house and into a 5th wheel camper so that they could travel the country and visit with all of their children and grandchildren. We found out that they were actually married in the backyard here, which was amazing because we were married in the backyard at the Lambert Estate. We were not expecting to find that commonality! We asked them why they chose our offer, and they told us that they had received several offers on the house, and even though our offer was not the highest, they knew ours was the one they felt like they were supposed to accept. They said a few times that they had no idea why they gravitated towards it. Daniel and I knew- it was because the Lord had chosen and set aside that house for us. It was an incredibly humbling experience. After we were finished eating, they gave us the key. We said our goodbyes, and set off for our new home.

When we arrived, Daniel unlocked the door, carried me over the threshold, and held me while I sobbed and he prayed over us and our family, and over the years we would spend in this house….this house that was to be our home. <3

The first order of business was to change the entry doorknobs.

We knew that we were wanting to do quite a bit of updating before we moved in. The biggest project by far was tackling the popcorn ceilings. Daniel started scraping them on possession day! I don’t think either of us were prepared for the amount of mess that it would make to scrape them all clean, but they look SO AMAZINGLY BETTER now. It was totally worth cleaning up the mess then, and now, because we are still finding remnants of drywall dust here and there from that.

Our rental contract was up on September 1st, but our goal was to be out by August 31st. The closing was on May 28th, 2019, and we took possession roughly a week later. Once we had taken possession of the house, we basically started driving back and forth nearly every day to blitz and get as much done as we possibly could. As we were leaving the house one day after a super-productive work time, the most beautiful full rainbow was right over the house…a beautiful reminder of God’s faithfulness in a time where we were experiencing it so fully in our lives.

The period of time where we were working on the house and driving back and forth from the old house was an absolutely crazy-busy, exhausting, and fulfilling time. We were seeing things getting done, and then there would be project setbacks, and so many other things. I remember being so ready to just be settled for a bit… feeling like you are stuck between two houses is somewhat miserable for a woman. I think we have this need to have our nests in order, and it simply isn’t possible when you are in the middle of a move, or renovation project, or big life event. 🙂

I knew I wanted a way to “journal” the project with pictures, since the house is going to be looking quite a bit different when we get finished. I ended up started an instagram account just for our home renovation projects, which shares the name for our new piece of paradise: “our urban farmstead”. Feel free to pop over and give us a follow if home renovation is your thing. 🙂 I’ll share a few pics here and there on this blog, but for now, that’s the best place for the most up-to-date renovation updates.

One of the other things that we knew we needed to address before moving in was the electrical. We ended up doing some swap work with some sweet friends of ours and they came and updated all our electrical and installed our new energy-efficient LED lighting and new switches, ceiling fans, and breakers! It has been such a blessing to have light switches in places that make sense, and for everything to be so bright. I am so thankful we went ahead and got that knocked out!

As we got into August, we finally had most everything finished that needed to be done for us to move in, and it was time to start getting our things moved over. A few of my brothers helped move quite a bit of our furniture, and our sweet church family helped us get the piano and couches loaded up and ready to be brought over. We were so thankful for the help in getting those things moved because we certainly couldn’t have done it on our own!

Finally, everything was moved, the rental had been scrubbed from top to bottom, and it was time to say “so long” to that chapter.

It has been so nice to be getting settled in here and learning about our new neighborhood and community. I am slowly but surely learning how to get around to the various shops for my errands, and learning how long it takes to get to my parent’s house and my piano student’s houses and various other things. Our neighbors are all so sweet, and we have thoroughly loved our backyard.

Another friend that was moving gave us quite a bit of outdoor furniture because they wouldn’t have room for it in their new house. It has already been such a blessing and really makes the back yard look so nice!

Here’s some photos of some of the “so far” afters…by “so far” afters, I mean that we still have quite a ways to go. The kitchen, for instance, still needs new cabinets, counters, and for the trim to be finished. We are also adding additional cabinet and counter space in there. We are also slowly going through and refacing all the doors to match, so that they aren’t just the standard hollow-core doors. We’ve still got tile work to do in the guest bathroom, and carpet needs to be pulled up in the last two bedrooms, pergo planks put down, and trim needs to be hung.

I absolutely love the way the light drifts through the house.

God has been so very good to us. I can’t wait to see what memories and adventures we have here. <3

Rest assured, you’ll be hearing soon about more of our various projects and things we are renovating. There’s still quite a bit to be done. <3 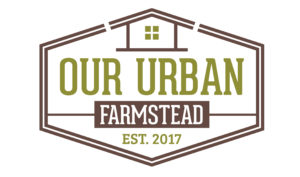 Welcome to Our Urban Farmstead! We are Daniel and Courtney Shevchenko. Our goal is to become as self-sufficient and sustainable as possible on our 1-acre urban neighborhood lot before moving on to bigger pastures.

We will be sharing our home renovation projects, the making of our mini-farm, boondocking tips and tricks, and other snapshots of the various adventures we experience in our day-to-day life on our farmstead.

We hope that this site will be a blessing and encouragement to you. Have a question? Feel free to email us. 🙂